END_OF_DOCUMENT_TOKEN_TO_BE_REPLACED

Lil Wayne Gets Presented With His Very Own Customized Hoverboard [Pictures] 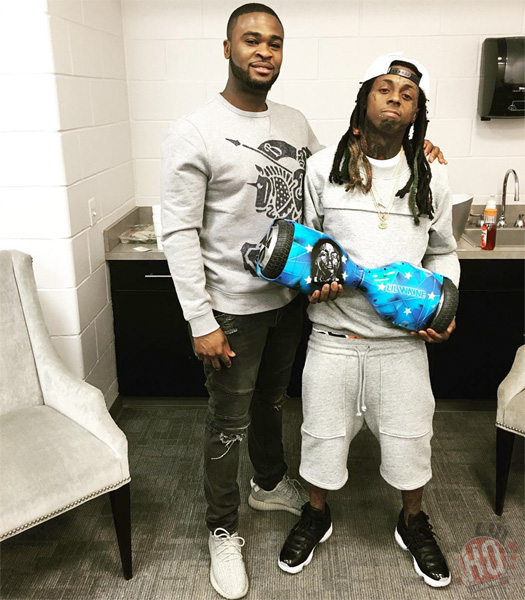 While backstage at the “Hot For The Holidays” concert in Newark, New Jersey on December 5th, Lil Wayne was presented with his very own customized hoverboard.

I’m not exactly sure that “hoverboard” is the official name for this new digital trend, which I’m sure you’re all familiar with as it has got really popular this year, because I’ve also seen them called “skywalkers”, “self balancing boards”, “foot scooters”, and “moonwalkers”.

You can check out a closer look of Weezy‘s custom hoverboard after the jump below! What do you think of it?

END_OF_DOCUMENT_TOKEN_TO_BE_REPLACED

Lil Wayne debuted his TRUKFIT clothing line and SUPRA skate shoes collection at the annual Magic Convention yesterday in Las Vegas, Nevada. MTV managed to get an interview with Weezy at the event to talk about why he decided to partner with SUPRA for his own shoe line.

“I was just rocking ’em when I was skating and stuff and when I got real cool with the homey Stevie Williams, it was like a plug from him. It was just a mutual respect on each end so it was just bound to happen.”

“I look at the reality and the facts of it, like I been rocking this shoe before I even knew what it was. So for me to start skating and for these shoe lines to start coming at me like, ‘Hey, we wanna give you your own skate shoe,’ it was only right for me to mess with the people I been messing with even before they were a skate shoe.”

The SUPRA shoes that Tune designed were originally supposed to drop in early 2013, but they will now be released in stores on May 1st, 2013.

In other Wayne news, hit the jump to watch a sneak peek of his “DEWeezy” commercial that he shot on Friday with Chris Robinson.

END_OF_DOCUMENT_TOKEN_TO_BE_REPLACED

SUPRA Announces Partnership With Lil Wayne For His Own Footwear Collection

Back in February, Lil Wayne hinted that he will design his own shoe line, but he did not give away too many details including which brand the shoes will be released from. Now SUPRA have announced that Weezy has teamed up with them for an exclusive partnership and confirmed that the first collection would be released in early 2013!

SUPRA is proud to announce an exclusive partnership with Lil Wayne. A full collection of new footwear designs, inspired and overseen by Lil Wayne, will be manufactured and distributed by SUPRA. There has been a longstanding respect between both parties: the SUPRA team cites Lil Wayne’s music as a source of inspiration, and Lil Wayne has embraced SUPRA and worn the Skytop since it was first introduced to the market in 2007. The collection of new models will launch in early 2013 at SUPRA retailers worldwide, and suprafootwear.com.

This shows that Tunechi is getting more and more into the fashion business, because we all know he has his own clothing line which is doing very well called TRUKFIT.

5Boro professional skater Willy Akers takes Lil Wayne‘s “strip club loot” after he dropped in off the roof of Wayne‘s Miami crib onto a skating ramp. You can watch the drop in above and if you didn’t already know, Weezy recently got the 5Boro logo tattooed on his face.

In related news, Tune spoke to VIBE about his new TRUKFIT clothing line and what inspired him to come up with the designs. Read the short interview below: