In addition to Weezy and his crew, a number of other local bounce artists made their presence felt at the funeral, including Partners-N-Crime, Kilo G, DJ Jubilee, Big Freeda and Ms. Tee, who was the first female artist to sign with Cash Money, followed by Shorty in 1995, who was the label’s second, and last, female member.

The closed funeral began at 11 a.m., and while more than 1,000 friends and relatives packed into the brick house of worship, the street outside was overflowing with nearly 1,500 fans paying tribute to the bounce legend. Many were wearing shirts in praise of Shorty (born Renetta Lowe), 28, with messages such as “R.I.P. Magnolia Shorty” and “We Love You Renetta,” as well as buttons that read “Forever ‘Shorty.’ ”

Wayne, Birdman and Mack Maine tweeted their condolences in the wake of Shorty’s murder last week, but on Thursday, it was former Cash Money rapper and Hot Boyz member B.G. who remembered his fallen comrade after the funeral.

The program for the service featured a photo of Shorty under the headline “A Homegoing Celebration for a Phenomenal Queen.” Shorty was gunned down last Monday alongside an unidentified man in a vehicle that crashed near a New Orleans East housing complex. Her murder came seven years after the November 2003 killing of another New Orleans rapper, James “Soulja Slim” Tapp, whose original stage name was Magnolia Slim and who grew up with Shorty in the Magnolia housing projects and gave her the Magnolia Shorty stage name.

The funeral was to be followed by a traditional New Orleans second line celebration in which her casket was be paraded down the street accompanied by musicians, friends, family and supporters. – MTV 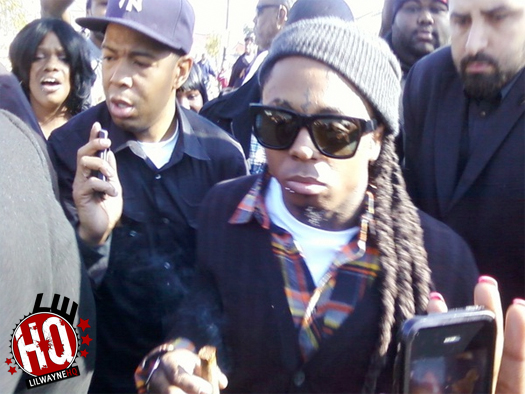