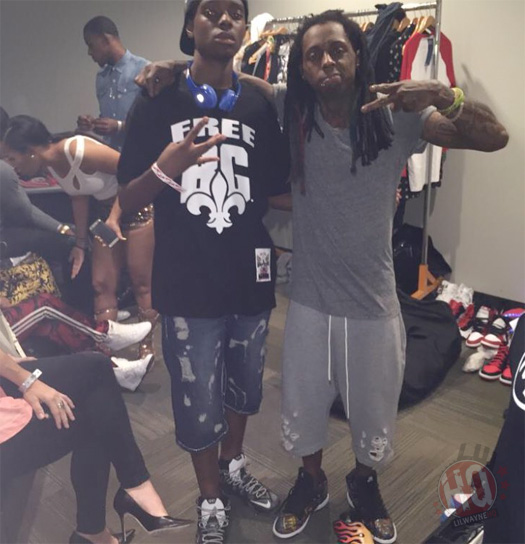 “I was never really into boxing when I was younger with the exception of watching Mike Tyson fights or even playing Mike Tyson in the video game ‘Punch-Out!!,'” Lil Wayne said. “But I really started to get into it with Zab Judah. I took a real big liking to him watching him fight. Back when he was kicking a–.”

After that, Lil Wayne was hooked. Mayweather called him in 2013 for his fight against Guerrero at the MGM Grand in Las Vegas.

“Floyd told me he respected my work ethic. He said he respected everything I’m about,” Lil Wayne said. “He said he heard about the way I work and all the music I put out. He told me that as soon as we were done talking, I was going back into the studio, and he’s that way too, right back into the gym. He said he would really love if I would bring him out for the fight. I was honored.

“He asked me how much money. I told him absolutely zero dollars bro, come on!”

For the first Maidana fight in May, 2014 it was Lil Wayne and Justin Bieber leading the way. Some would say that combination is a very unique contrast.

“The song choices are Floyd’s at all times. For Maidana, it was ‘Believe Me’ and I was humbled to do it. Whichever song he picked for whichever reason he picked. And hopefully, I was attacking that reason heading out there.”

When fight day rolls around, Lil Wayne and a potpourri of celebrities, family, security and his team gather in Mayweather’s locker room.

“It’s interesting,” Lil Wayne said, “He’s a real focused dude. When you walk into his locker room, there may be 60 people in there. And it is as quiet as ever. Everyone’s just watching Floyd. He’s just looking in the mirror and punching the air. But it’s just quiet. It’s a very intimidating aura when you walk into the locker room.”

Lil Wayne never wears an in-ear monitor you may see most musicians wear during a live performance. It’s a device that allows the artist to hear the music mix and vocals. With the energy of walking out in the midst of thousands, it’s a different story for him.

But there is another huge difference between the concerts Lil Wayne performs and the walkout.

“People are there to see Floyd,” Lil Wayne said. “A show — I don’t care who you are — is about the element of surprise. It’s about capturing the moment. With that said, everyone is there to see a fight. I approach it knowing that if I was a fight fan, I don’t want to see some guy come out rapping. I came here to see this guy walk out, for the fighters to be mad at each other and fight. So, I approach it like that and try to stay humble. And I try to make my part of it small.

“If you notice, I stay down low just so you know I’m not the guy. People don’t overlook what I did, but they accept what I did. Now let’s fight!”

Does Lil Wayne, who spends time outside of fight weeks with Mayweather and his kids, think Saturday will be Floyd’s last fight?

“It’s hard to say because Floyd is a businessman,” he said. “To say this is his last fight is a good business move. And then he could go on to take on another fight against who everyone wants to see, Manny Pacquiao. That will be the biggest money score in the world. I don’t know if that’s what he’s doing. But Floyd is a very undeterred human being. He’ll make a decision, and that’s his decision. But he’ll be at 49 wins. Who doesn’t want 50?”

Who’s next for Lil Wayne if and when Mayweather retires?

“Boxing is hurting,” he said. “I was an Adrien Broner fan before. To know that I actually thought he was going to be the next Floyd Mayweather, where’s boxing at?

“I talked to Adrien recently at a club. My question was why are you here? I was paid to be here. Why are you here? You box. I tried to tell him that he needs to analyze things. You’re in a music club, night club. People here know musicians. The only people in here who know you are guys. You’re making a fool of yourself because you think everyone knows you. No woman here knows you. They have to ask their guy who you are. And all you are right now is the guy standing next to Lil Wayne.”

And what about Saturday’s fight against Berto?

“If Berto does something, then we’ll have something to talk about,” Lil Wayne said. “I think it’s going to be an interesting fight because Berto is going to go at Floyd. He has got nothing to lose. He doesn’t care if Floyd knocks him out. I want to see Floyd fight a guy who keeps coming at him. I’m looking forward to watching this fight.”