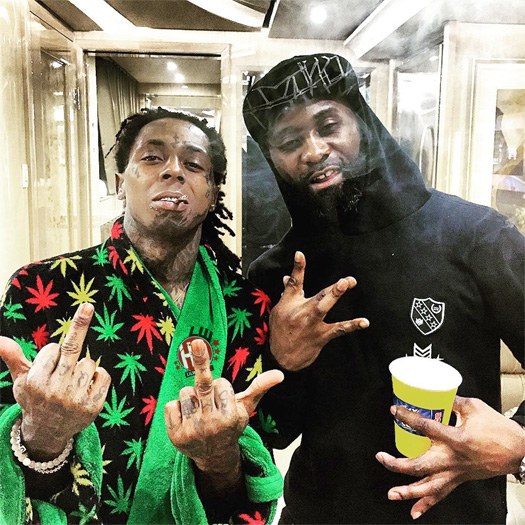 Adweek: You had your Apartments.com Super Bowl ad and now these Samsung spots. Are you looking to be in more advertising now?
Lil Wayne: Hell yeah, I do. It was fun doing it, first of all. Literally being there, action, cut, I only deal with that when I’m shooting videos, and we are usually in charge of it. It was kind of different to have to actually follow the rules, and that was cool. Being on the set and knocking it out, it was fun.

When you see the finished product of it, and people are calling you, saying, ‘We saw this and we saw that,’ it’s cool. It’s a different side of things. It’s not, ‘We saw you dropped a new album, or we saw you got a new tattoo or we saw you’re with a new girl.’ It’s, ‘We saw you on TV in the Samsung commercial, we saw you in Apartments.com with George Washington,’ things like that that are totally different and I like that.

Did you like the Apartments.com spot’s reference to the Jeffersons’?
Yeah, I thought that was creative.

What do you look for when you’re considering being in an ad?
Apartments.com was my first ad. I’ve never been involved in anything like that. With that said, we’re just so humble to have the opportunity. We’re not at that point where we have to be like, ‘Okay, let’s see, we’re not going to do this.’ We’re not like that over here. What do you want us to do? We’re pleased to do it and thanks for considering us and what time should we be there.

Do you think being in Samsung and Apartments.com will make it so more agencies and brands want to work with you?
I hope so. I tried to do my best. I tried to do what they wanted me to do and not do Lil Wayne. I took that away from the situation and approached the scene as if I was just the guy that they chose to play this role. With that said, I did it that way because of course I could’ve approached it like I’m me and I’m going to say it how I want to say it and how my fans and what they’re expecting to see out of me and I didn’t do that. So I approached it like I want to do this [appear in ads] more so that whoever is watching would be able to say, ‘I like what he did and we could probably use him for this.’

Does it add a level of fun to advertising, where you’re not doing your typical persona?
Oh, it was too fun. The finished product when you watch it back, it’s not bad. I was like, whoa, like when I watch it back and I can forget that I’m watching myself that means that I did something good.

What did you think of being part of the Super Bowl?
That was dope. That was the illest idea ever. You know everybody watches the Super Bowl. I know people who don’t even know what football is and they’re going to watch the Super Bowl for the commercials and for me to be involved in that, if I can’t perform at halftime then I’m going to be in commercials.