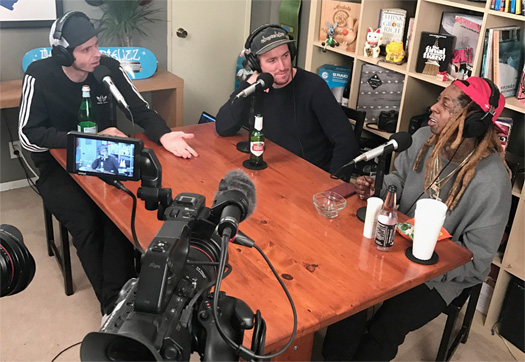 Jenkem Magazine recently did an interview with Chris Roberts and Roger Bagley from “The Nine Club” to chat all about their skateboarding podcast.

During their conversation, Chris and Roger spoke on what it was like to have Lil Wayne as a special guest on their show, Wayne bringing his blunt roller to the set, and how every music website picked up on the news of Weezy announcing his Funeral project via their show.

You can read what the two of them said after the jump below!

What’s the process like for getting Lil’ Wayne on the show?
CR: Spanish Mike’s boy Yo Yo skates with Lil’ Wayne and they told him he should do this skate show. Lil’ Wayne can get up from an interview in five minutes. He’s kind of notorious for it. I didn’t know if he would stay there for 10 minutes, 20 minutes, an hour, two. I was trying to hurry up and I was kind of hyper. But after a while, he started laughing and we were just shooting the shit I was like OK, he’s chilling for a while.

He just loves skateboarding. I was blown away by how much he knew and how much he loves it. He knew the switch flip manny! That episode went kind of viral in the music industry. Every website that dealt with music picked up this story about Lil’ Wayne releasing a new project called The Funeral which he mentioned for like 30 seconds. It was this 30-second thing that I had no fucking clue about. I could have edited that part out. I had no idea that people would go crazy over him mentioning this one little new project. I wondered if he did that to hype up the show.

Did he bring an entourage?
RB: He brought his fucking blunt roller. He was sitting in the other room rolling joints for him all night long and smoking them during the show.