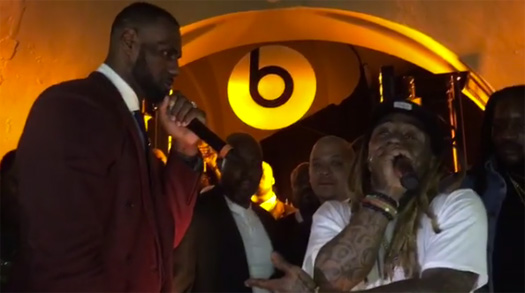 On February 18th, Lil Wayne attended the “Beats x NOLA” event during NBA All-Star Weekend in New Orleans, Louisiana that was hosted by Beats By Dre and LeBron James.

While at the party, Weezy performed live with 2 Chainz, Fat Joe and DJ Khaled. He also reunited with Juvenile, Turk and Mannie Fresh on stage to perform songs like “Bling Bling” and “We On Fire“. LeBron even got on the mic to say a few words:

However, it wasn’t all good at the start of the show as Tunechi said he wasn’t feeling how dead the crowd was and for his manager to not book him for anything else like this in the future:

You can check out some clips of Tune from the event after the jump below!